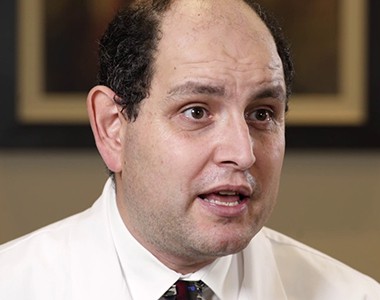 Listen to Dr. Rapoport discuss his journey to Seattle.

Dr. Rapoport attended the University of the Witwatersrand in Johannesburg and after graduating in 1990, practiced general dentistry for 6 years. In 1996, Darrin and his wife Pam relocated to Seattle where he received his Masters of Science in Dentistry from the University of Washington and completed 3 years of highly specialized periodontal and implant training.

Dr. Rapoport is licensed to practice in Washington State and internationally, in South Africa, the United Kingdom and Australia. He is a board certified Periodontist and Diplomate of the American Board of Periodontology, the highest honor awarded in his field. He is an active member of multiple organizations including the Seattle-King County Dental Society, the Washington State Society of Periodontists, the American Dental Association, the American Academy of Periodontology, the International Congress of Oral Implantologists and the Academy of Osseointegration. In addition, he regularly lectures at national and international events and has been published multiple times.

In 2001 Dr. Rapoport joined Pacific Northwest Periodontics and purchased the practice two years later. He and his team are committed to providing exceptional periodontal and implant dentistry care.

Dr. Rapoport is regarded as a local dental expert, contributing to several KOMO Newsradio Lifebeat segments and appearing on KOMO 4, KING 5’s Health Link, and KCPQ 13. He has also been featured in South Sound Magazine’s Doctors Making A Difference edition and been recognized as a Top Periodontist six years in a row by Seattle Metropolitan Magazine.

The Experienced Team at Pacific Northwest specializes in the treatment of Periodontics and Dental Implants. Click below to view some of our transformative work.

We work with Alphaeon Credit and Care Credit for financial assistance. Contact our offices for additional information or click below to learn more.